The programming language chosen by developers can be one of the most important aspects and should also be one of the first steps taken. iPad/iPhone is going to be the next programming device in the tech world. What makes this assumption true is an increasing number of programmers who are preferring Programming Apps to learn and code programs. And the result is not bad.

The highlight of Buffer Editor

Coda also offers numerous remote protocols such as WebDAV, SFTP, Amazon S3, and DreamObjects, as well as a local and remote file manager. “Clips” is a special feature in Coda, which lets programmers save and repeat commonly used bits of code.

The highlight of the Coda App

Pythonista comes with many third-party modules such as BeautifulSoup, SciPy, Flask, and Bottle modules. And it also includes NumPy and Matplotlib integration for scientific visualizations.

Textastic is an advanced code editor for iPad with support for syntax highlighting, remote file transfer, and SSH. This App is compatible text, code, and markup language editor, which supports more than 80 programming languages.

The highlight of Textastic

Codea even supports a camera, accelerometer, and touch. You can export the completed apps to Xcode and build them as App Store apps. 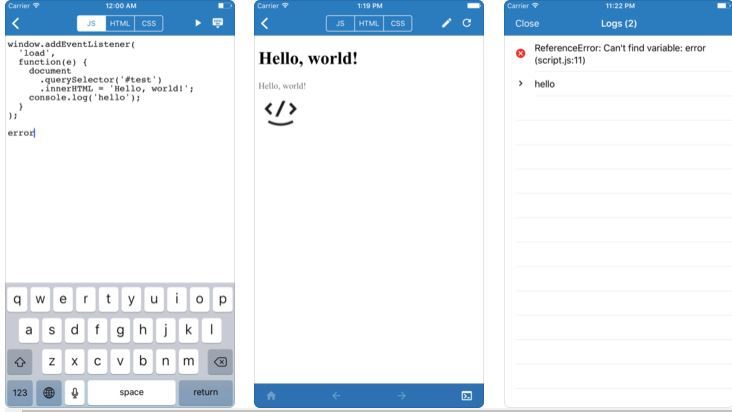 With JavaScript Anywhere, you can edit JavaScript, CSS, and HTML code on your iPad and preview them in the internal browser. You can even import the finished code to your Dropbox.

The highlight of JavaScript

CodeToGo is a powerful programming app, which lets you create and run code in 50 programming languages including Java, Perl, Python, and Ruby. This App comes with a syntax highlighting feature. This intuitive app is easy to use.

CodeToGo also lets you transfer files to and from your computer through iTunes File Sharing. The app also supports Dropbox. The ideone.com API the app is associated with allows you to test your code and check the results instantly.

Dash is an offline API documentation browser, which allows users to search through an unlimited number of APIs. The coding apps for iPad works offline as well.

The highlight of Dash API Docs

AppCooker runs on iOS 8 and above versions.

It lets you mock up the iPad, iPhone, or Apple Watch and preview them on real devices with an app called AppTaster. AppCooker uses native iOS 8 controls for its mockups.

iPad is gradually turning out to be a programming device with the support of compatible Best Programming Apps and other mobile coding apps that are developed by major mobile app development companies.