When you are attending a lecture or business meeting, it can be difficult to balance between taking notes of key points and actually listening to what is being said. This is where Dictation Apps or voice recorder apps would come in handy. You get to capture the entire meeting or lecture which you can then listen to later at your own pace.

The problem though is that you may still need to transfer this audio recording into written text for ease of searching. Transcribing it by hand is an exhausting and time-consuming exercise.

Speech-to-text apps help you overcome this headache by reducing the time needed to convert audio recordings to text and also minimize the errors encountered during the process (read more on error tracking and monitoring).

Leveraging the power of computational linguistics, these apps can recognize speech and create a written document out of it. Nevertheless, speech-to-text apps aren’t created equal.

There are wide variations in capabilities, features and the number of languages supported. We take a look at five Dictation Apps that certainly rank up there among the best.

Different people will have different speech-to-text requirements. If you are looking for an industrial-grade app, the ListNote Dictation app must be on your shortlist. Specifically built for the pro user, it comes with a wide variety of tools allowing you to create notes, edit documents, build spreadsheets and browse the Internet with nothing more than your voice commands.

The interface is intuitive and easy to understand. ListNote is one of the most popular Free speech to text app for Android in the Google Play store, with more than 1,000,000+ downloads. What’s more, Nuance Dragon Pro has machine learning capabilities that can improve this performance even further as the app adapts to your voice and the words you use most frequently. 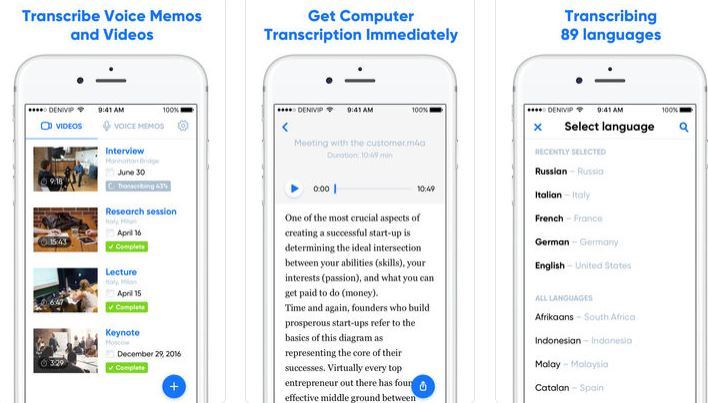 Available for iOS only, this app’s name tells you all you need to know about what it does. Transcribe is a popular application whose defining feature is turning voice memos and videos into text files. Few speech-to-text can produce such high-quality text. It supports more than 80 languages.

You can import audiovisual files from elsewhere (such as your Dropbox account) for conversion to text. After transcribing a file, export the text to a word processor for final editing.

Transcribe costs far less than Nuance Dragon Pro—it’s actually free to download but has in-app purchases for those who want to have more functionality than is available with the basic version. 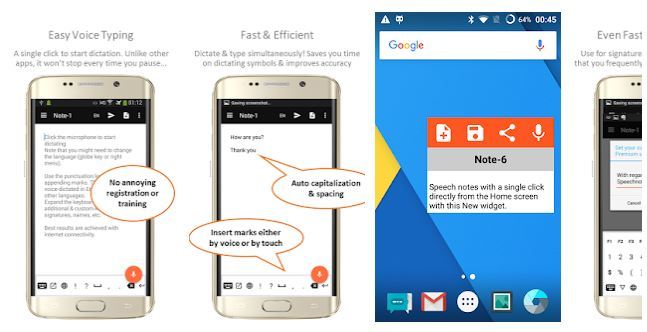 Speechnotes is an Android dictation app that’s relatively easy to use. Unlike many other speech-to-text apps, you don’t need to create an account before you can use it. Simply launch it, press the microphone button and you’re ready to go.

Speechnotes is built on Google’s voice recognition technology. It has such an attention to detail that you can dictate punctuation when recording a note if you don’t want to use the punctuation keyboard. It has automatic capitalization too. Add names, greetings, signatures, and other regularly used words to ensure fewer conversion errors over time.

To further customize your notes, there’s a wide range of text sizes and fonts. Like Transcribe, Speech notes is free to download but includes in-app purchases if you want access to premium features. 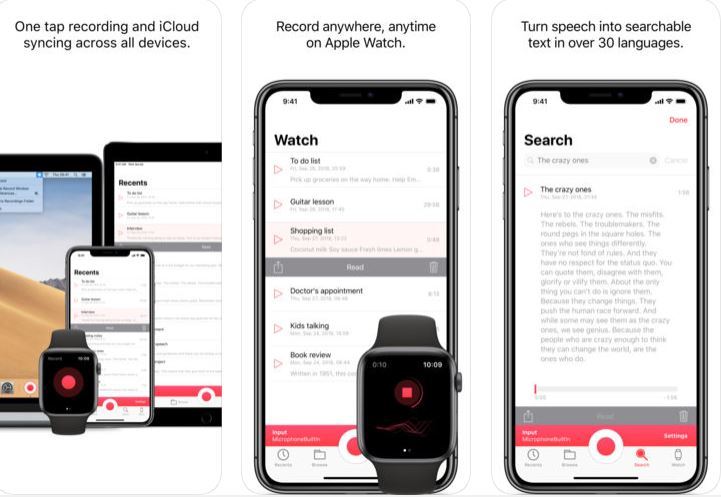 If you are looking for a strictly dictation-only app whose core function doesn’t get drowned out by secondary features, Just Press Record is the way to go. Available for iOS only, it’s a mobile recorder that features single tap recording, high-quality transcription, and iCloud synchronization across Apple devices.

Of the five Dictation Apps, we discuss here, Just Press Record is arguably the easiest to learn. To capture a voice note, press the record button and the app runs for as long as you want. But Just Press Record wouldn’t truly qualify as a speech-to-text app if it didn’t have a transcription feature. You can quickly turn a voice note into editable searchable text.

You could edit the resulting text within the app or export it to a word processor.

Just Press Record recognizes punctuation commands so you don’t have to manually insert these into your text later on.

With support for over 30 languages, it covers all major regions of the world. Just Press Record keeps the data in the cloud which means you can access your files from anywhere and on any online device.

Evernote has been a major player in the productivity and organization space for years now. It’s gained an enviable reputation for its ability to bring order to everyday business and personal processes. But we’ve included Evernote here because it has a useful feature that allows users to dictate straight to the app.

Even though it doesn’t have the option to convert audio to text (so isn’t a true speech-to-text app), the fact that it’s in use by so many people makes it worth a mention here.

You can enhance your voice notes by combining them with web clippings, photos, sketches, and PDFs. Use your phone’s camera to scan drawings, handwritten notes, business cards, and any other paper document.

Evernote is cloud-based so your notes are accessible from wherever you are and on any internet-ready device. With the business version starting at nearly $15, it’s a fair price considering that the recording feature is just one of the many things you can use Evernote for.

There’s no perfect Speech To Text Converter Apps that’s suitable in all circumstances. An application that may feel inadequate for one person may be a perfect fit for someone else.

So before you settle on anyone, start by determining what it is you want out of it. Write down your needs and expectations. Develop a checklist of must-haves and good-to-haves.

Evaluate each Dictation Apps on your shortlist against this checklist and go for the one that comes closest to meeting your expectations.

If you are having a hard time choosing between a final two, you could download and use the two for a week or two.  these Dictation Apps we’ve discussed here are either free or low priced.

Ergo, you won’t suffer significant financial loss if you abandon one after the brief trial period.