Memes are everywhere! Whether it is social media or any chatting app. I have been amazed by how people can beautifully create new memes. It intrigued the creative side of me. I looked up some meme generator apps at the Play Store. These Meme creator apps help you to create trending memes online.

Anyone can create their own, funny, and modern meme, and most meme generators are free. These free meme maker android apps help you make high-quality memes.

Here is a list of the Top 10 Meme Generator app for Android. Do keep in mind that these funny memes generator apps come with quite a database and will need some space to get installed on your phone.

Memedroid is a fun app. A voting system internally helps rank the memes accordingly. You can also upload your meme to the existing database.

This meme generator apk lets you add text to some famous meme faces that you will find everywhere across the web. The fun thing about this best meme creator app is, it’s available offline. Unfortunately, it is paid and not something we would like to opt for.

Mematic – Make your own meme

This best meme creator app India has the one with the simplest UI so far!

You can either make a meme, rate the app, or know about it from the main page. Once you click the make a meme option, you will be taken to another page where you can click an image, choose a pre-existing image, or select one from the apps gallery.

Another plus point of this meme generator app is the fact that you can simply add text or modify the background as well as add text. You can either save it or save it and share it anywhere.

You can make memes on GATM with either a pre-existing template or add any new template. Besides, you can also load a new picture to make a meme out of this.

Another feature that makes this best meme generator app is the fact that you can look up images on the net directly on this app.

You can play around with a lot of features that generate memes. All that you create would be saved in a gallery present in this meme maker with your own pictures.

The UI of the Tamil meme generator app is very simple. It comes with a bunch of photos that can be converted to memes. You can use your own selected pic for making a meme out of it.

The rest of the process is exactly similar.

Besides adding text, you can add images and text bubbles also. Once the meme is made, you can save it.

Instameme comes preloaded with a ton of memes. Besides, you can make a meme from images from your gallery.

5000 meme templates, Add filters, add texts, meme pics, add emojis, add troll faces, etc. You can play around with a lot of features in the app. The size is ~23 MB.

This is not the best meme generator due to its size.

You can go to the other ones on the list.

This meme generator app Android has one of those apps which is neither too big nor too small. But these are the memes that find a way into a lot of things, so the size can be overlooked.

You can add filters from a wide range of filters. The goggles, caps, necklaces, and cigarette photos, meme photos can be selected from a wide variety of options available from the Thug Life Photo Studio. The gallery is quite massive, and it keeps getting even bigger after you watch some videos.

This is the best Online meme generator app Android can get cause it is as small as 2.23 MB only. This meme editor app makes meme which is like ‘ Straight Outta ___.’ You can cause the meme colored or B/W.

You can change the font and also add a background image if you want. You can’t do much with this memes app, but it is enough if you are in search of a simple meme generator.

This memes creator app among the other meme generator apps lets you modify the face of anyone with another face, like the Derp, Derpine, Troll face, etc.

That’s pretty much about the app.

I wished the app could do something more or have a couple of more face options. This app is okay if you just want to replace faces with troll faces.

Pardon me if I’m wrong, but I think memes started from the ‘Be Like Bill’ meme. The screenshot below will help you understand how the so that meme will look.

The meme-making app is getting better with every new update. You can modify the text font and size, add your preferred image, color and size, change text color, swap the position of text and image, play around with the image border, etc.

It is a very simple Android app and is very easy to navigate. It is surely the best meme app android can have!

Giphy is not a new name, especially if you are using Facebook messenger.

Having this meme maker app on your Android makes it easier to use and post them in messenger as well as other social media. You can create an account here as well.

There are many categories in which the memes are divided. They are – memes, TV, Bollywood meme templates, funny meme pictures, meme text, music, reactions, etc.

This can be the best meme generator app provided we consider the categories.

These are just a bunch of meme generator apps that we have tried from the Play Store.

Shoot us your queries in the comments below.

If you have a suggestion for any meme generator apps, we would be happy to hear from you. 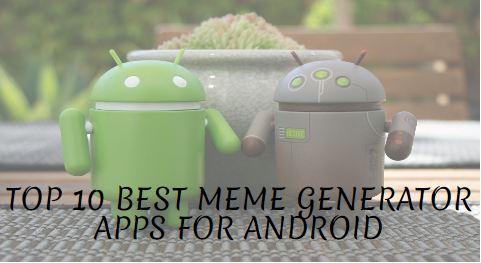