It is correctly said that “Memes are the best way of sarcasm”. Memes can give a sarcastic twist to your severe and dull conversations. People usually look for apps that can give them the best memes or help them make one. To simplify this search, we have listed some cool meme generator apps for iPhone users.

These meme generators can help you make some unique and sarcastically awesome memes and give a twist to your conversations.

InstaMeme is one of the top meme generators in the market. It has close to around 1000 inbuilt templates with an option to make your own too. It is built on an easy to use and stylish platform. This iPhone meme generator comes with a real-time WYSIWYG editor which gives a preview of how the meme will look after making changes.

This application deserves a download from your side. So try this app out and review them with your suggestions if you like the app.

This is another such top-rated meme generator that has got a bunch of cool features to boast about. This application also gives you a preview and other features like using your images for making memes. You can save the images to your gallery or share it straight away with your friends anywhere.

This app has got a Pro version along with a free download version too. Both the versions are identical with just a difference that the free one puts watermarks on the images.

No doubt, mematic is a good meme maker app for creating memes, but it has limitations with the text fonts and colors. But no need to worry as you can buy the pro version for 2.99$ which gets you all those features.

In the pro version, you can add your text with the desired font of your choice. After saving the images to the gallery, you are ready to go and share them with others.

Honestly, this meme maker betrayed me and is definitely going to do the same for you when it comes to the user interface at the first impression. It may look a lot outdated to you as if it’s made for older iPhone models.

This modern meme maker app is still good looking into some kickass features it gives to cover up the UI part. You can also use the versions of the created memes by other users. These versions can be sorted by popularity, relevancy and share them.

MemeFactory works on the traditional idea of asking users to join their social network and then letting them make changes to their meme templates collection.

Once you signup to their social network you can easily create memes and share them on other social networks. Meme Factory App is just a simple best meme app for iPhone with no rocket science in it.

It has a pretty decent UI and works on the simple idea as any other meme generator.

Mememize is a pretty decent choice for users with less time to make memes. It can save a lot of time with simple UI and availability of different types of a meme to use on your own pictures you want.

You can edit, rotate, flip and remove text, emojis, and whatnot. So go and try Mememize out.

Memefier is based upon face-detection technology. This Online meme generator app basically detects faces in the picture and gives you the option to replace them with memes.

Memefier comes with a stock of 30 in-built memes templates. You can also save those memes to share with your friends.

These are just a bunch of the Best free meme maker app iPhones that we have tried from the Apple Store. 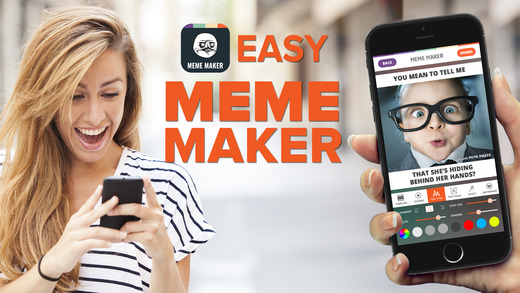