Since its inception in 1987, the concept of universal remote control has baffled many tech-savvy people across the world. This has been followed by numerous other advancements in this field, the latest entrant being the Universal Tv remote Apps. The idea of controlling your Tv through the use of various Smart Tv remote Control apps can be quite intriguing for many chaps out there.

Universal Tv remote apps is a generic remote control for tv that can be used to control several functions of a smart as well as an Android Tv through the use of an IR (Infrared Rays) blaster which is a common inbuilt feature among all android and smart devices.

An infrared blaster is used by Android devices to transmit a signal which can interact with the signal of most of the smart Tv enabling these smart tv remote apps to control all android TVs.

There are many amazing and efficient universal tv remotes apps in the market and we have chosen some of the best tv remote apps for you so that you don’t have to worry about the nerd details.

Here is the list of the top five tv remote apps that you could use to add more spice to your binge-watching experience.

The ever-expanding business of Xiaomi led the company to try its hands on free Tv Remote App. Xiaomi did not disappoint and created a very considerable user-friendly remote app that could control TV along with an air conditioner, projector, and Set-top Box too.

This mi tv remote app can also be personalized according to your preferences and settings for different smart devices including TV.

There is also a backup option that you get in MI remote app that lets to have an emergency backup for all your user-defined settings.

Like many others in our list of TV remote online apps, MI also works on IR blaster so you have to be sure that the appliances that you might be using this app for, must be having one.

Mi Remote can be integrated with your TV scheduling so that you would not miss your favorite Tv shows. With no more pop-up ads and more than 10 million installs, this tv remote control app is sure to be looking out for.

Developed by Kodi, Yatse is one of the most modern and intuitive smart tv remote apps that are available in the play store. With its power-packed feature to use it over Airplay, Fire Tv, Chromecast along with smart tv and Roku, Yatse has expanded its territory by providing more generic features since it was started in 2011.

Features like the Cloudesave which could actually provide easy backup and restoration for all user-customized settings could be a surprise for many of us.

It can also be optimized to use less battery which is an added advantage for lower range android phones.

This Android TV Remote Control app has different types of themes and added features that make it one of the best user interfaces among other android tv remote apps.

You could even try out there a premium app for which you have to pay a bit but that would not go in vain as its premium version has much more user-specific features.

With inbuilt support for Amazon, Alexa SURE is definitely one of the best tv remote apps with the drop of a hat.

You can not only control, your TV with this Smart TV Remote App but can also control other types of media players that are connected to your network.

With a regular monthly update, Sure is trying hard to keep up the pace with fast-moving technology. Like many other Android TV Remote App, Sure is too compatible with almost all brands of Android phones.

The process is also very easy to attach to any device.

You just have to select” ADD DEVICE” which will then take you to select the brand of the appliance for which you might be using this smart remote app, after which it will tell you to test the IR blaster to control the signals if that device and you are good to go.

While most of the features of Sure are standard features that are included in our list of TV remote Apps, what really sets Sure apart is its complete integration with Amazon Alexa. It lets you control 10,000+ skills that are available for Alexa through voice commands. With a play store rating of 4.3, it is sure to catch your eyeballs once you start using it.

As the name suggests, it is one of the versatile among the lot that we are discussing among other android tv remote apps. Anymote works fantastic with Samsung remote control for tv, Panasonic, Xfinity, Xbox, and many other Tv as well as other entertainment devices.

This is one of the tv remote control by mobile phone that uses voice commands. It can be used for controlling several functions of the connected Tv like air gestures (limited to Samsung S4 models).

The android remote Control apps have their own customization which the user can customize according to his/her preference.

The only downside of this android remote control app is that it is not (until today) compatible with Sony and Huawei smartphones but will soon update its compatibility to make room for these smart devices making it an all-rounder just like the other tv remote apps.

With a play store rating of 4, Anymote can surely enrich your TV watching experience.

When you see half a million user reviewing a TV remote app and a 140 million registered users, you don’t have to second guess yourself about its usability.

Other than the usual accessibility of Android and smart tv, the Peel can also be used to control Apple Tv, along with various smart appliances like a smart Ac and a smart heater which is not a very common feature in many tv remote apps.

It also recommends you for your daily dose of binge-watching by giving you constant suggestions which obviously is sent according to your taste and recommendation.

You also get personalized alerts regarding the arrival of any new episode or series that you were watching.

All your favorite content could be made available to the dashboard of this universal remote for tv app through your personalized setting.

The tagline of this peel remote control for tv app is very aptly written as “the more you peel in, the smarter it becomes.”

In the vast universe of smart IoT ( Internet of things) enabled appliances, there is an ever-expanding scope for new and interesting universal remote apps that are hitting the play store every day.

This is also true for the android Tv remote apps where many big tech companies and the newbies are coming out with their version of Tv remote apps.

Tell us how you feel about our list of top 5 universal TV remote apps and any other universal remote app android that you might want us to add or review for you. 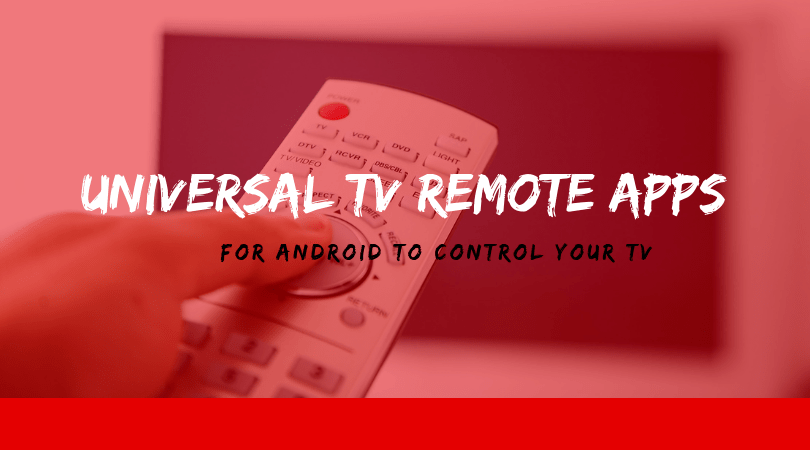