Scanning electron microscopy imagery is fascinating. SEM technology serves as our window to a world that’s otherwise invisible to the naked eye. SEM imaging lets us see images of organisms like bacteria, protozoa, viruses, and other micro-organisms too small for our vision to look at.

The process involves more than just magnifying and improving the resolution of the final images. SEM technicians have to make sure that the samples are not damaged during the imaging process. Preparations include using special coating techniques to protect the samples from heat damage. The use of a sputter coater in this process also improves the quality of the final image.

What Factors Can Cause Sample Damage in SEM Imaging?

The mechanism in which electron microscopes work is one source of possible damage to the samples. Electron microscopes fire a beam of electrons at the sample to scan it and render a three-dimensional image. This beam is very focused and could be as powerful as 30 kilo-volts (Kv).

How Does Coating Benefit SEM Imaging?

Applying a metal coating over the surface of a sample has several benefits for scanning electron microscope imagery.

Secondary electron emissions occur when the primary electrons transfer enough kinetic energy to the secondary electrons for them to break free from the atom and enter the vacuum. The more free electrons created by the process, the better the resulting image will be.

Secondary electron emissionis the process that could result to damage as described in the previous section. Metal coating, however, improves the sample’s conductivity and allows primary electrons to replace the displaced secondary electrons. This preserves the chemical bond of the specimen.

Improved conductivity also allows the microscope to come up with highly detailed images while reducing the power it has to use to achieve the required secondary electron emission for those results. This means savings in power consumption without sacrificing the quality of the SEM imagery.

Types of Metal Coating in SEM

There are generally two types of coating techniques used to prepare samples for scanning electron microscopy. These are, namely, thermal evaporation and sputter coating.

Sputter coating involves fusing conductive material to samples made of non-conductive metal. Metals commonly utilized to coat SEM samples include gold, platinum, silver, chromium, iridium, and a gold/palladium alloy. These materials are forced to eject some of their atoms in a vacuum using inert gas and two electrodes. These ejected atoms adhere to the gas, which then transfers them to the sample for coating.

The sputter coating is thin, around 10 nanometers. This is enough to induce conductivity without altering the chemical makeup of the sample. Sputter coats work well with specimens that are sensitive to the high power of the electron beam, as well as those with low conductivity.

Thermal evaporation commonly uses carbon as a coating material. This technique sees applications in X-ray microanalysis and in the use of specimen support films.

There is also a more advanced form of thermal evaporation called E-beam evaporation. This technique uses a special electron beam to heat the coating material to its melting point. It follows the same procedure as described above. The vapor created by the electron beam comes into contact with the target surface and forms a thin coating.

Scanning electron microscope imagery is an intricate process. The sample needs to be protected first from the adverse effects of the secondary electron emission before it is scanned.

This means that there is always acoating procedure preceding the scanning process. This process helps preserve the integrity of the specimen by adding a thin coat of conductive material. This coat absorbs electrons coming from the emitter to replace electrons lost during the secondary emission. This ensures that the chemical bond between the sample’s molecules remains intact and undamaged. 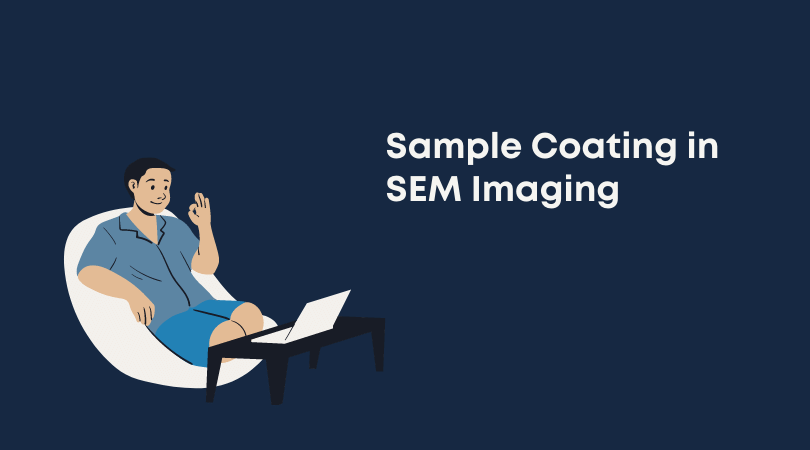