Finding a decorous Google Photos Alternatives is no easy task. Within the time most Android users have already grown accustomed to Google Photos and its impressive set of features.

From unlimited high-quality photo backups to Google’s impressive photo grouping and sharing options, none of the users ever thought of finding an alternative to this awesome app.

But in a recent announcement, Google mentioned that Google Photos is finally stopping its free unlimited backup option from June 2021. Consequently, if you have already filled up your 15GB free storage, you will have to pay subscription charges for further uploads.

While getting the Google One subscription isn’t a bad idea, it’s worth noting that there are various free and paid cloud storage alternatives to Google photos that can be considered to backup your photos and videos.

So if you are planning to switch to a better alternative to the Google Photos app, we have picked some of the best free cloud storage for photos to back up your photos right away.

What is Google Photos?

If you are an Android user you must have already come across the Google Photos app for sure. In case if you haven’t yet, Google Photos is a standard photo sharing and storage service for your daily use.

The photo-sharing website backups photos and videos that are taken on your device with greater effectiveness and security. The app is rated 4.5 on Google play as it has been so good with its features and usability, needless to say, it has become an industry standard.

Why should you look for alternatives to Google Photos?

Back when the Google Photos app was launched, Google assured that its users would be able to backup unlimited high-quality images and videos for free.

But with the recent announcement, Google is found to change its take on Free photo storage, as result, users will have to get the Google One subscription once they fill the 15GB free storage.

Also, it’s worth noting that Google in its new policy also mentioned that all data belonging to inactive accounts for more than 2 years will be deleted from its servers.

So here are some of the best Google Photos alternatives to try out.

Yet to be launched in India, Amazon Photos is an awesome alternative to Google photos which allows you to backup and share unlimited high-resolution images for free. Unlike most other service subscriptions, you don’t need to pay separate charges for using Amazon photos as it is bundled with the Amazon Prime subscription.

So if you already have an Amazon Prime membership, you are all set to go. The Amazon photos app can be found on all major platforms like Android, iOS, Windows, and FireTV. You can easily sync and share photos and videos across all your devices seamlessly.

That said, you can opt-in for its paid plans starting at $1.99 per month for 100GB of total storage in case you require more storage.

Dropbox is a highly popular cloud storage that can also be considered as an alternative to Google photos app. It can be a suitable replacement for Google photos if you are looking for a paid solution.

The basic plan of Dropbox only provides 2GB of cloud storage, as a result, you won’t be able to store any huge amount of data unless you get a paid membership.

Syncing your photos across all your devices can be done so easily as the dropbox app is accessible on Desktop, Android, and iOS devices.

Additionally, the Dropbox app can be configured to automatically back up photos taken on your mobile device, which saves a lot of time.

The paid subscription starts at $9.99 per month which gives 2TB of total cloud storage in total.

More like a social network for photographers, Flicker can be a great platform to store and showcase your photos and creativity. The Flickr photo upload site is here for a long time and still growing with millions of photographers around the world actively uploading photos consistently.

You can get started using Flickr for free as it allows up to 1000 photos upload per account.

As it’s a great community to share your photos, we would suggest you store your best clicks on Flickr rather than filling your free upload limit with secondary photos.

Later if you find the platform promising, you can upgrade your Flickr account for unlimited storage for $6/month.

Undoubtedly the best place to backup your photos is if you are into the Apple ecosystem. With iCloud, Apple brings in some great features to store your photos and videos without any hassle. Unlike most of Apple’s pricing, iCloud subscriptions are indeed priced on par with Google Photos.

Although new users only get 5GB of free storage, the paid plans start from just $0.99 per month for 50GB of cloud storage. With the recently launched Apple One subscription bundle, you get access to various services combined for a better sum.

With iCloud, obviously not just photos and videos, you can back up your documents, messages, and other data which can be shared across all your Apple devices in a few clicks.

Mega is yet another cloud storage provider that can be used for free photo storage. It works similar to Dropbox and Google Drive in which you can save and share your photos, videos, and documents.

Compared to others, the highlighting part of Mega is that it offers a whopping 50GB(with conditions) of cloud storage for free. Backing up your data to Mega is as easy as it takes only a few steps.

You can organize your photos into different folders and albums making it easier to navigate and share with others.

While sharing, you can set different privacy options as well as permissions to keep your data safe. And even if you want to share some big videos taken on your phone Mega is the one to go with.

The receiver can get the data even without installing signing into the Mega app.

Although they provide 50GB of free cloud storage, one thing to note here is that 35GB out of 50GB is only limited to one month after signup. So at the end of the first month, users will be left with a total of 15GB of free storage.

Once you fill up your free storage, you can extend your storage using its paid plans. The premium subscription starts at €4.99 per month for 400GB followed by €9.99 for 2TB.

Officially from the Microsoft team, OneDrive as the name suggests is Microsoft’s cloud storage solution for desktop and mobile devices. It runs spotless on all major platforms with an array of features that take your photo storing and sharing experience to a different level.

Needless to say, if you are a Windows user, OneDrive is a must-have app in your toolset. It can be easily integrated with most Microsoft services, making your life a lot easier. Once you have the OneDrive app installed on your mobile device, you can set folders that need to be backed up automatically.

All backed-up photos can be found across all your synced devices be it mobile, tablet, or desktop. On signup, OneDrive gives 5GB of free storage. Further, paid plans start at $1.99 per month for 100GB of storage.

In addition to the free 100GB storage provided, you can also add an additional 5GB of storage for each referral you made up to 500GB. Once signed in, you can start adding your data to the Degoo cloud as well as select specific folders for auto backup.

Stored files are much easier to explore, as Degoo has got a clean interface for its applications across Android and iOs. Finally, Degoo’s premium lineup includes two options, namely the Pro plan and the Ultimate plan which gives 500GB and 10TB respectively.

So these were our picks for the best alternatives to Google Photos. As you have just read, there’s a number of paid as well as free photo storage services available for you to switch on to.

While Degoo and Mega can be a great alternative for free storage seekers, apps like Dropbox come in handy if you are looking for a paid alternative.

Either way, make sure to check each one of the listed cloud storage services before making the move. And if you have already, do let us know your favorite Google Photos alternative in the comments below.

Is Google Photos going away?

Nope, Google Photos isn’t going away. Google is ending its free unlimited photo backup service from June 1 of 2021. This means that you will be required to get the Google One paid subscription to backup photos on the Google photos app once you filled your 15GB free storage.

What can I use instead of Google Photos?

You can choose from a variety of free and paid google photos alternatives like Dropbox, Mega, Degoo or Flickr, etc. You can read the full article to know which one suits you better as each one of these alternatives has its own pros and cons. 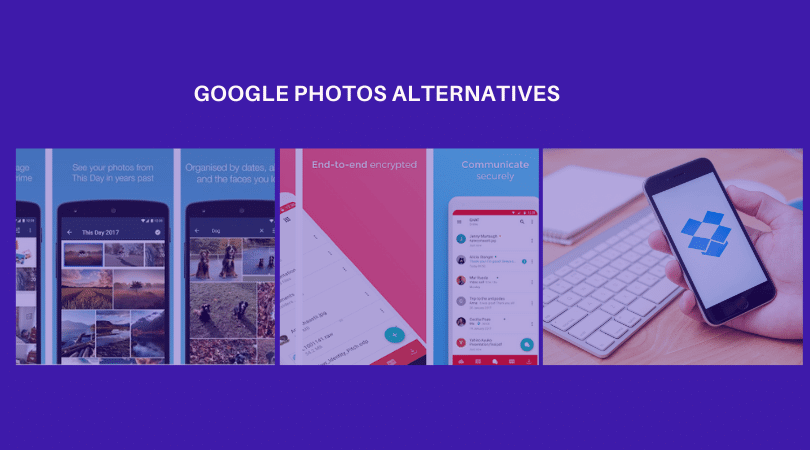