The smartphone world is bifurcated by the users according to their choice. If one side of the world chooses Android, the other side will choose Apple iOS. We will be discussing the 5 best iOS Emulators for PC Windows and MAC available to run iPhone apps.

Unlike the availability of Android, iOS has restrictions as it is not the open-source software to build customizations on. When it comes to the software experience, iOS takes the lead with better optimization and resource management.

Those who cannot afford an iPhone with their kidneys can experience the environment by creating an ecosystem on their Windows PCs.

What is an Ecosystem?

An ecosystem is the configuration of the system hardware resources to make it sustainable for iOS apps to run on it. It may not reflect Apple’s original hardware design or structure but will create a collaborating group of existing hardware to run iOS and its apps on it.

This ecosystem cannot be created by an average PC user unless one has advanced knowledge of it. So, some thoughtful developers have developed a few Windows software to run iOS apps like as on iPhone.

We call them ios app emulator.

ioS Emulators create the required resourceful environment on the machine to run applications of another software environment. Luckily, we have many Free iPhone emulator for Windows to run iOS apps.

Simulators replicate the environment to look alike the desired software on the machine. At some point, you may not find the difference between an Emulator and a Simulator. The area where simulators can’t come in handy is in development whereas the Emulators can be used in iOS app development on IDEs.

Note: However, the emulators or simulators cannot replace the original hardware optimization and software experience on it. So every emulator or simulator comes with some focused benefits and limitations.

We have sorted out some ios emulator for windows 10 and ios simulators available to Windows users based on the features and popularity.

If you are the one who is looking out to lay your hands on iOS without having an iPhone, try these.

iPadian is the best iOS Emulators for PC that replicates the environment of the Apple iPhone software on Windows PC. It creates an interface that looks like running on a real iPhone.

iPadian need not have much hardware configuration as it is a simulator with some predesigned app groups for experiencing the iPhone UI on Windows PC.

iPadian ios emulator for pc is available for free on Softonic. You can try it before buying a paid version.

If you are a developer and wanted to give a demo of the app to your client or a customer before publishing it on the App Store, you could use the Appetize.io ios emulator for windows for that.

With Appetize, you can demonstrate your apps in presentations without being to download and stream them onto the projected screen using various other tools.

Also, as you cannot show a demonstration with multiple versions of the iPhone in a presentation, it is wiser to choose an emulator as Appetize provides.

Appetize can also be used to train your team or your clients and test them on the desired version of the iOS environment.

Smartface iOS Emulators for PC enables the developers to emulate the preview of the applications on the iPhones virtually.

Unlike the simulator in XCode, which actually cannot reflect the true nature of the iOS, Smartface is an emulator that enables users to develop cross-platform applications on Windows PC. This is a kind of bypassing of the Apple restriction to the developers.

To use this iPhone emulator for pc, download and install Smartface onto your iPhone or iPad and connect it to the Windows PC through iTunes software. Then, you can start developing the native application on Smartface.

TestFlight is Apple’s beta testing service that is accessible through an iTunes connection. It allows beta testing with both internal and external users thereby giving you the developer the final review of the application before publishing it on the App Store.

If you are a developer and creating applications on Xamarin, the TestFlight ios emulator for pc will give you a seamless experience as it is an Apple-owned service. So, emulating apps that are developed by you would give accurate test results compared to any other developer based emulator.

MobiOne Studio is a visual designer of the iOS applications for the Windows operating system.

It needs no coding skills from the app designer. The drag and drop easy interface allows the developer or say, the app designer, to layout the app in both portrait and landscape mode in the designing phase itself.

MobiOne Studio might give a better drag and drop interface but coding gives full control to the app developer.

Emulation/simulation is necessary for Apple iOS development as every enthusiastic developer cannot afford a Mac to start development on. Thanks to the IDE developers who have created these ios emulators/simulators for making the app testing easy and simple.

Did I miss any other iPhone emulator for windows that you think should take a position in this list? Comment below. 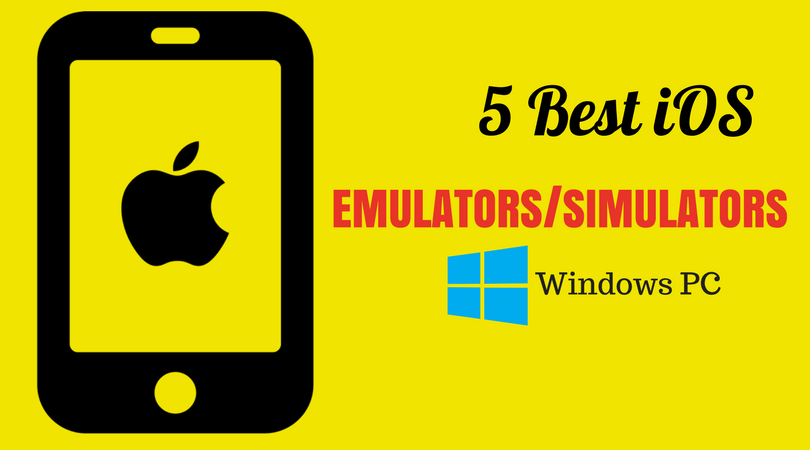