You realized the importance of mobile presence for your business and you developed a mobile application. Is this enough for enjoying profits? Or you need to put more effort into this?

Currently, there are more than 2.8 million apps in Google Play Store and about 2.2 million apps in the Apple App Store, which means you are not the only one building mobile applications. Several people have and are investing in the app development process, which in turn, signifies that your journey does not end at app creation; it is the beginning of another battle.

With so many mobile apps in the app store, it is quite clear that you need to put as much effort into app marketing as you made in the app development process. You need to execute a well-planned strategy to remain on the top of the app store. After all, a high ranking will boost an immense number of downloads and revenue.

While there are a plethora of marketing options, the most effective method is ASO. According to European Technologies Consumer Technology Online Survey (Q4 2012), 63% of iOS and 58% of Android users find a new mobile application by browsing in the store, making it the biggest medium for app discovery.

And the best part is that you need not spend a hefty amount on this. So, are you ready to explore the world of ASO marketing? Let’s begin with what ASO is.

ASO, also called App Store SEO or Mobile App SEO, is the process of optimizing the apps with an aim to attain a higher ranking in the app store, and ultimately more conversions (downloads). ASO generally consists of three processes, namely:

Both the app stores follow different algorithms for discovering, categorizing, and ranking the applications, which is primarily influenced by the keywords present in the app listing. So, Keyword research is the initial step for ASO marketing.

To optimize your app listing, you should think of all the possible relevant keywords users would use to find the mobile application. Besides this, you need to consider your app’s key functionality, features, in-app purchase options, category, and much more to make a list of keywords you can go for.

Once you are done with keyword research, screen out the list and get the right keywords with the help of keyword research tools or by simply checking the suggestions in the App Store search bar.

To ensure that your mobile app achieves a higher ranking, you should remain updated with the changing algorithms. For instance: Apple has just made significant changes to the app store’s algorithm because of which the app search results will appear more intelligent and relevant now.

The next step is to work on your app’s on-metadata (elements that are directly controlled by the mobile app developers), and off-metadata factors (elements are not directly under control, but can be influenced).

When talking about on-metadata, it refers to the app icons, descriptions, screenshots, preview videos, etc. about which we will discuss later in this blog. While the off-metadata factors refer to factors like App Ratings and Reviews.

In the new Apple App Store (App Store 2.0), the ratings and reviews are given considerable importance. The all-time ratings are now highlighted in the app – displayed right below the app icon.

Whereas, the average rating of the app’s current version and the combined rating of all the versions will be no longer seen on the app page. Moreover, the mobile application can be searched according to the ratings, which means the developers have to take care of their user experience and app ratings as well.

Now, comes A/B Testing. To make your product page completely optimized, it is required that your app is thoroughly tested to see how the conversion rate gets affected.

Did you know? User engagement on your app also drives app store ranking. In addition to making your app as user friendly as possible, you can use rewarded engagement tactics to drive app ranking and better ASO.

It is certain that you continuously track and analyze the results of optimization in terms of KPIs like keywords ranking, the volume of organic downloads, conversion rate, ratings, reviews, etc.

Now as you are familiar with the whole ASO process and its importance, let’s move on to the product page elements that can drive app downloads.

Here is a list of the elements you need to work on for boosting your app’s visibility:

Both Google and Apple’s search algorithm gives paramount importance to the app with titles containing a keyword the users use to search in the app store. This means it is a good practice to include keywords in your app title(name). However, you should not integrate too many keywords in the title and make it spammy.

Also, one can use the format “Brand Name: Keywords” or “Brand Name- Keywords”, as you can see in apps, such as Google Maps, eBay, Skype, and Beauty Plus.

It has been found that only 5% of Google users and 2% of iOS users click on the ‘Read more’ button, so the mobile application developers should write a clear and concise description stating the app’s key functionality- how the app is unique and why the users should install it with most significant details mentioned within the first two lines.

One should include suitable keywords, social media links, a call to action, and consider localization. In the case of an Android application, you can also add rich formatting and emojis to your description and make it stand out from the crowd.

Apart from the description section, Apple has also provided a new field called Promotional text (of 170 characters) which can be used to announce the latest news, events, or limited-time offers associated with the app.

Icon, the first visual element of a mobile application, plays a vital role in increasing app downloads. It prompts the users to click on the install button.

For the same reason, it should be attractive as well as define the purpose of the app. When considering the app icon, do not add too many elements to it. Also, use vibrant colors with clear shapes that can be visible even when scaled down to the smallest size dimension required by the app stores.

Users usually decide if they want to download the mobile app or not by looking at the screenshots. So, it is important to add the best screenshots with each giving a message strong enough to make them download the app.

It has been found that 60% of users view just the first two images; they do not prefer swiping further. So, add your best images to the first two positions. Add a short caption (if possible), localize the screenshots, but keep the background clean to give a positive feel.

When talking about iOS applications, it is better to add vertical screenshots as the user can see more screenshots in the vertical mode.

Besides app screenshots, videos also have a great impact on the users. So, add impressive videos describing the key feature of your mobile application.

But, keep in mind that 80% of users do not watch a video for more than 12 seconds. So, make it short and informative. Do not add any fade-in or ‘welcome’ message at the beginning

Apple App Store 2.0 lets the mobile app developers add up to 3 App Preview videos instead of 2 like before. Also, the videos are displayed before the screenshots to bring huge traction to the app.

On the other side, Google Play Store allows pasting the YouTube video URL in the ‘Promo video’ field. Also, it counts views both on the app page and on YouTube. Besides this, you can also attract more users by using a nice poster frame (in iOS) or feature graphics (in Google Play) along with your video.

If your mobile application is already submitted to the app store. However, the downloads are limited, look forward to pushing an update. An App Update as per the reviews and market needs can make your app rank high since both Apple and Google recommend updated applications. This will increase the app downloads as well as enhance user loyalty which is necessary in a long run.

App marketing might seem challenging on a shoestring budget. But thanks to ASO, it is quite easy to promote a mobile application and get a higher number of downloads. Now as you are well-versed with the main ASO factors, apply them thoroughly and improve your app’s visibility and ultimately, downloads. 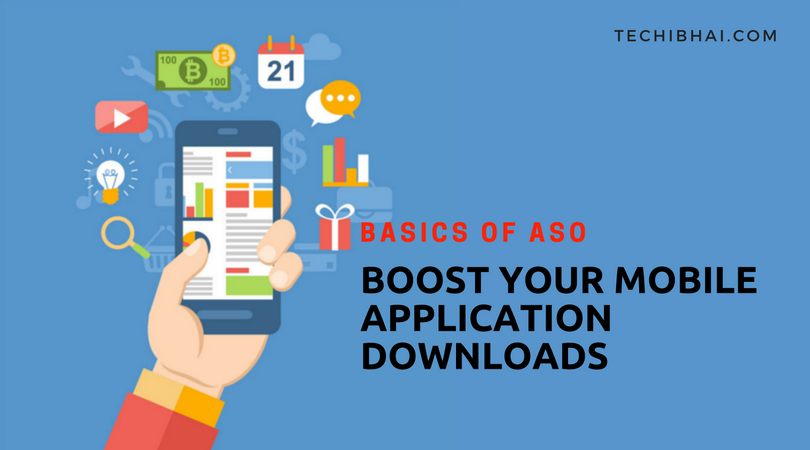 1 thought on “Basics of ASO: Boost Your Mobile Application Downloads”