Tumblr is another free blogging platform out there. On Tumblr, you will find lots of unique posts, images, and videos. However, on the one side downloading images is not a tough job. But there are often times when we want to download a Tumblr video and doing so, it’s not really an easy job.

So the question is how to download Tumblr videos on Android and PC?

Well in case if you have a similar question in your mind. Then we are here to help you out. In this article, we are going to share a couple of points that will help you to download Tumblr videos.

But before that, let us give you an overview of Tumblr. So let’s just head into the topic without wasting much of the time:

Tumblr is a microblogging and sort of social networking website that was launched in 2007. David Karp is the founder of this platform, and right now it is owned by Verizon Media.

The platform allows the users to post multimedia and other content to a short form of a blog.

Also, as a user, you will be able to follow other users’ blogs and stay updated with their content.

On the platform, you will get to see different types of content like images, videos, audios, gifs, and so on. Also, one can create their own blog on the platform.

In order to download Tumblr videos, you can try out Timbloader.

Timbloader is one of the best Tumblr video downloader mobile apps when it comes to downloading Tumblr videos. Also, the app is extremely easy to use.

You can download the app free of cost on your Android smartphone, and you will find the app on Google Play Store.

Also, the good part of the app is that you can use it to download photos in high resolution and audio along with videos.  In order to get started with the app, you can follow these steps:

Step 1: First of all download and install Timbloader for Tumblr.

Step 2: Now go to Tumblr and look for the video that you wish to download.

Step 4: Now you will find a list of installed apps on your device, simply select Timbloader.

Step 5: After that simply download the video that you wish to download and you are good to go.

Next, we have the Downloader For Tumblr. This one is also one of the popular apps to download Tumblr videos on Android devices. The app lets you download photos and videos from Tumblr very quickly. Also, the app is extremely easy to use and you can download the app free of cost. However, to make you understand in a better way, you can follow these steps to download videos from Tumblr.

Step 1: At first download and install the Downloader for Tumblr from Google Play Store.

Step 2: Then launch the Tumblr app and look for the video that you want to download.

Step 3: Then simply tap on the share button and select the Downloader for the Tumblr app.

Step 4: Now wait for the app to load the info and you will be able to save Tumblr video.

The next app that you can try out is the Media Downloadr for Tumblr. This one is also one of the easiest to use yet popular app available out there. With this app, you will be able to save audio, photo, video easily.

Also, it lets you download videos from some of the other social media websites.  To get started with Media Downloader, you can follow these steps:

Step 2:  Open the app and tap on Tumblr, this will open the Tumblr app for you.

Step 3: Simply look for the video that you wish to download.

Step 4: Then tap on the share button and select Media Downloader and the video will get downloaded.

Either way, you can also paste a tumblr video link to download it.

The best way to download Tumblr videos on PC is to use this online website called Download Videos From. You do not need to install any software or anything. Instead, you just need to visit the website and paste the Tumblr video link and it will download the video for you. To get started, follow these steps:

Step 1: At first go to Tumblr and copy the link of the video that you wish to download.

Step 2: Then go to the following URL: https://www.downloadvideosfrom.com/Tumblr.php

Step 3: Now over here paste the link that you have copied.

Tubeoffline is also one of the similar sites to the Downlodvideosfrom.com. This website is also free to use and has an extremely easy process.

In order to get started with this website, you just need to copy the link to the video that you wish to download. After that, you have to go to the following URL: https://www.tubeoffline.com/download-tumblr-videos.php and paste the link over there.

And then hit the download button and your video will get downloaded.

In the end, you can try out DreDown. This one is also one of the popular websites which let you download Tumblr videos. Using the site is pretty similar to other online websites. Plus, it is free to use.

In order to use this site, you will first need to go to the following URL: https://www.dredown.com/tumblr. After that simply copy the URL of the Tumblr video that you wish to download and paste it on the Dredown website. After that click on the download button and your video will get downloaded.

So that was a guide on how to download Tumblr videos on Android and PC.

All the above-mentioned websites, apps, and tools are free to use. So go ahead and check them out and see which one of them working the best for you. Also, for any questions, do comment below. 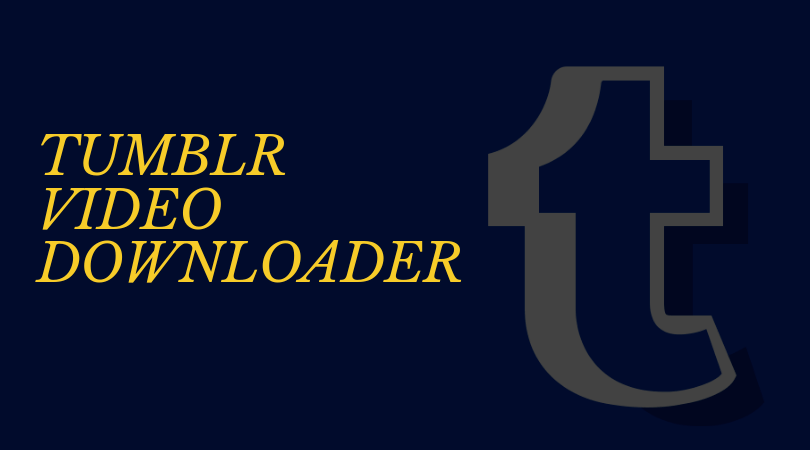