Are you looking for the best screen lock apps?

looking for the Solution, How do I Lock my Android phone Screen?

If so, don’t be worried.

I want to solve that problem for you.

In this article, for your consideration, I have made a list of 7  best android lock screen apps.

So, what is Screen Lock?

Display or Screen lock is usually a security feature that can help prevent unauthorized access into the Android SmartPhones.

All of us want to protect our Andriod smartphone from those unintended intruders who are always trying to take a peek into our Android phones.

Most of them are our siblings or those irritating friends constantly trying to know about our private life and those chats of messaging apps. So, it can sometimes become a daunting task to go through tons of screen lock apps and choose the right one.

To make your task even simpler, here is the list of the top 7 smart screen lock apps that you might want to try to ensure proper protection for your Android device.

Microsoft’s name guarantees quality and efficiency. Developed by the innovative team of Microsoft Garage, Next lock Screen is among the first next-generation Android screen lock apps.

Next Phone Lock Screen has a wide variety of uses ranging from various lock patterns and updates on battery life. It is perhaps for these reasons among many others that it was awarded ” Best Lock Screen App ” in 2016 by AndroidPIT.

If you are looking for not just an attractive screen lock app but also one that can enhance the security of your Android device, look no further than CM Locker.

CM provides ultimate security features that could assure your phone’s security. Intruder selfies, Anti-theft protection, and light APK are among the main reasons for this app to be ranked among the best Android screen lock apps. Its 4.6 use rating along with 3.1 million reviews says a lot about the credibility of this android lock screen app.

One of the most intriguing on our list, LokLok is quite different from our usual screen lock apps because it lets you connect with your friends and can act as a whiteboard for two or more groups of people.

Thus, everyone who is in sync on this app can get the messages or your draws that you want to show. Apart from the fun stuff, LokLok also has an advanced security control feature making it more dependable among screen lock apps.

With a patented PIN pad and getting an instant email with the selfie of any intruder, PIN Genie Locker is among the most highly rated screen lock apps on the play store. The smart app lock feature is an added bonus which is the main reason for over 1 million installs.

PIN Genie is among the top 10 utility app on the play store because of tons of tools that can be customized by the user according to their own preference. It also supports a traditional PIN pad, pattern PIN pad along a fingerprint sensor ( which of course should be inbuilt).

There might be not that many customization options as compared to other Android screen lock apps, but if you love minimalistic design along with superior performance, AcDisplay is the one for you.

With its simplistic layout and an ambient lock screen design, this screen lock app is sure to impress with its aesthetics. Inactive hours and low-priority save a lot of battery power and energy.

With a one-touch virtual key to turn off the device and an innovative concept of a floating button, HD lockscreen wallpapers, screen Lock is surely one of the famous Android lock screen apps.

With the built-in library of the icon, you might want to experiment with many cool lock screens, different icons of an app. Screen lock also lets you create shortcuts for your favorite apps. The last accessed application can also be accessed very intuitively using one of the best screen lock apps.

Developed by the technical team of Apps Clean, AppLock is certainly one of the best screen lock apps that supports app lockers with fingerprint locks, dynamic lock screens, pattern locks, and password locks.

While the market of these screen lock apps has increased drastically, it has also bought many monotonous and similar apps in the play store with little or no exclusive content and features. The above list thus contains a premier list of screen lock apps.

Do let us know about our list of top 7 free screen lock apps and remind us if we have missed any. 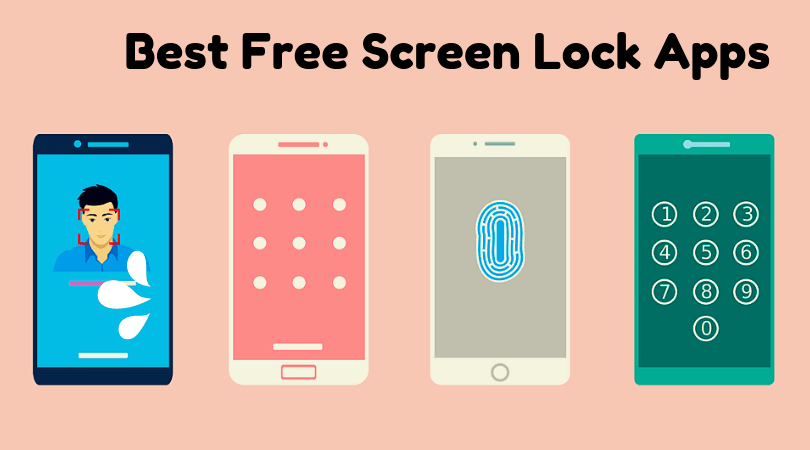